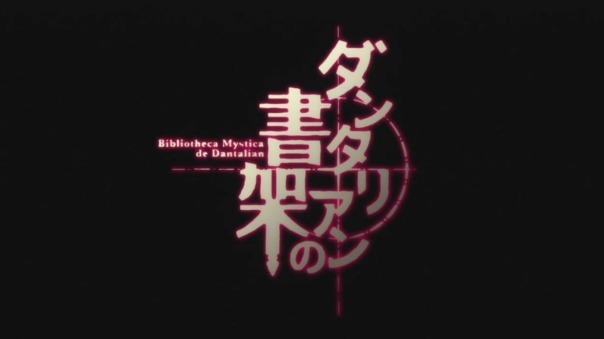 The Mystical Archives of Dantalian

Overdue first impression post and it’s about time this show came out. We have a another mystery light-novel adapation here with GAINAX heading the animation. Yeah, GAINAX. When I look at GAINAX’s track record, it makes me think that GAINAX usually doesn’t take on such material such as this. Anyway, with that said here are my first impressions on the show.

Someone make a hi-res wallpaper of this, pronto!

The episode begins with some sort of ethereal dream sequence and we have a young version of the main character talking to a girl. But that sequence doesn’t make much sense until near the end of the episode. Our main character, Hugh Anthony Disward – Huey, has had his grandfather killed and in his will it is stated that his grandfather’s mansion and possessions will be passed on to him, under the condition that he looks after the Mystic Archives of Dantalian.

Huey’s grandfather was an avid collector of many rare book, even going as far as to spend half of his wealth on one particular rare book. As Huey enters the mansion, he realizes that all the books are gone. As he investigates further, he finds a young girl called Dalian…Dantalian. Huey mistakes her as a doll much like Kazuya mistook Victorique as a doll. But I’m not here to compare this show to GOSICK. Anyway, among many of the books Huey’s grandfather owned, it was rumored that they were demonic and some were grimoires.

The contract is formed.

Dalian’s character is somewhat of a tsundere without much of the “dere”. But she isn’t a complete bitch or anything. Just rather intelligent and holds herself in high-regard. Huey’s character is rather interesting as he is unlike many of the anime protags we usually see. He has a keen sense of confidence and he keeps himself calm and collected, especially during the more chaotic scenes of the episode.

This episode deals with a pop-up book called The Harlequinade, one of the books that used to belong to Huey’s grandfather, until a man named Conrad stole it. Certain elements from the pop-up book begin springing to life, beginning with a knife thrower, to an elephant, then a lion then a dragon. To deal with the dragon, Huey makes some sort of contract with Dalian, and Huey then becomes in possession of a grimoire which he uses to defeat the dragon.

The first episode came off sort of strange, and people ARE going to compare it to GOSICK as I inevitably did. Huey makes for an interesting character, and him alone makes me want to continue this show. However, there is also the interesting premise, since I have an interest in grimoires and things like that, so this show might keep me entertained for a few more episodes. I might follow the whole “book-of-the-week” formula, or maybe it won’t. We’ll see about that, but yeah I’m gonna be watching this.